Snow had been promised for the whole country, but Merseyside escaped. Nonetheless it was a very much reduced group of only four that met on a cold and frosty morning at Queen Square. We were thinking of going to to Hesketh Park in Southport, but the X2 bus failed to stop at its assigned temporary stop in Victoria Street, and we watched it sail away. So we went to look at the new landing stage at the Pier Head, then took the ferry to Woodside. 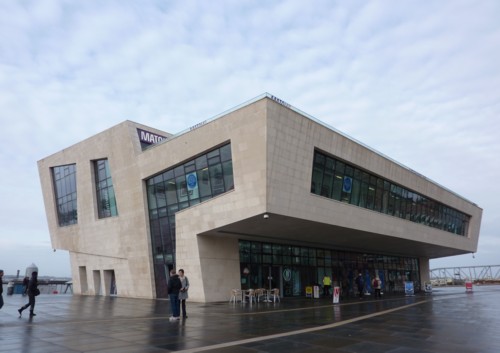 The female Peregrine Falcon was sitting right at the top of Hamilton Square tower, staring out over the Mersey. We took ourselves to Birkenhead Priory and had a tour of the Scriptorium, with a display about Ian Fraser VC, a much-decorated diving pioneer who died on the Wirral in 2008.

There were very few other birds about today, just the usual gulls and pigeons, but we did see a party of Long-tailed Tits in the trees around the Priory.