It wasn’t the best day to walk along the front  the gloomy weather forecast said heavy rain all day. Only the hardiest few of us turned up for the 10am ferry and we almost had it to ourselves. Surprisingly, the rain soon stopped, leaving a grey and threatening sky, but we were sheltered from the westerly wind by the Wirral peninsula itself, so we hardly needed our hoods or umbrellas. 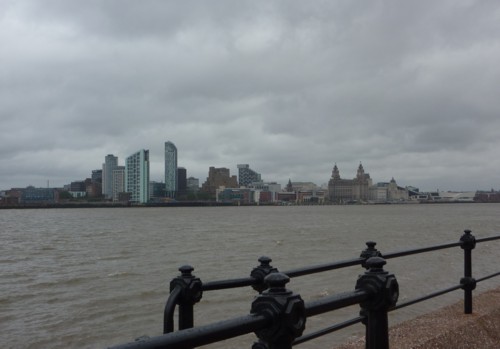 There were very few people out, just the odd runner and cyclist, an orange-clad lifeguard on his second day at work and small groups of fishermen. One told us he caught a Bass last week, but usually he gets Plaice and Dab, too small to eat.

The birds all seemed to have gone somewhere pleasanter. Two Cormorants were on the post at the end of the Egremont groyne, odd gulls were being thrown about in the wind and there were Wood Pigeons and Starlings in the gardens. Near New Brighton two young swallows were trying their luck in the updraught from the waves battering the sea wall. One of them may have been a House Martin, but it was too windy to get a proper look.

As the tide neared its highest point the waves were crashing over the railings. 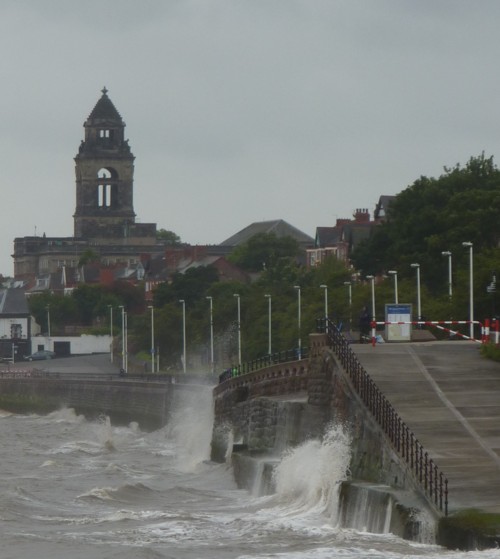 There was a lot of activity from the Pilot boats and tugs. We watched a liquid natural gas ship come in, the Haci Fatima Ana registered in Istanbul, and two more whose names we couldn’t read.

As we turned the New Brighton corner the wind hit us like a slap in the teeth. Heads down, we made it to the bus stop in time for the 432 at 1.15. No point in chancing our luck any further.