After the very dry weather of the last few weeks, today we were washed out early by heavy rain. It had been only cool and drizzly when we left Queen Square on the 10A bus at 10 past 10, but a light rain was falling when we got to the park soon after 11. For shelter we took the route along their Oak Wood path. 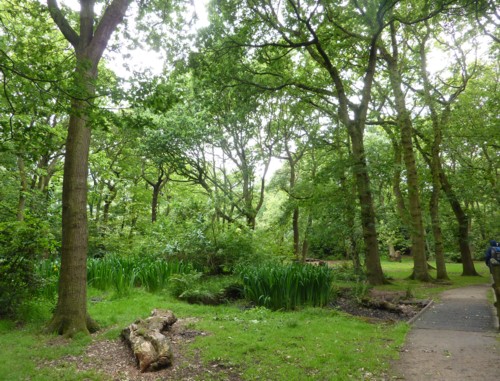 A Blackbird, a Mistle Thrush and seven Wood Pigeons were all poking about on the sunken lawn, hoping for waterlogged worms. We saw several spotty young Robins, plenty of Magpies and the grass was full of molehills. On the lake there were the usual Mallards, now starting their moult, Canada Geese, one Greylag, and a Lesser Black-backed Gull. A Coot was sitting on a late nest. 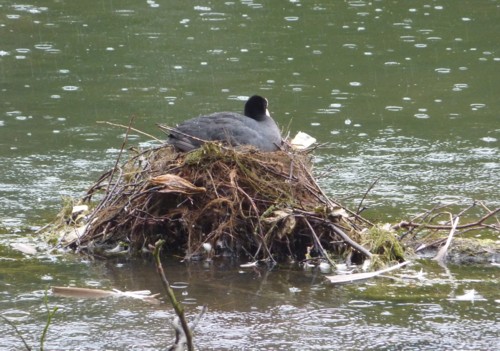 Several Swallows were over the water, and one or two Sand Martins. We asked the Rangers, but they didn’t know the nearest place they nested. I wonder how far they had come?  A family of Long-tailed Tits were flitting about, an unidentified Tern flew over and a pair of Mute Swans had five cygnets, but we couldn’t see any leg rings.

A Great Crested Grebe had made a nest on the rolls of barley straw that were all around the edge of the lake. She may have been brooding chicks, but we didnt see any. Perhaps she was on a late clutch. 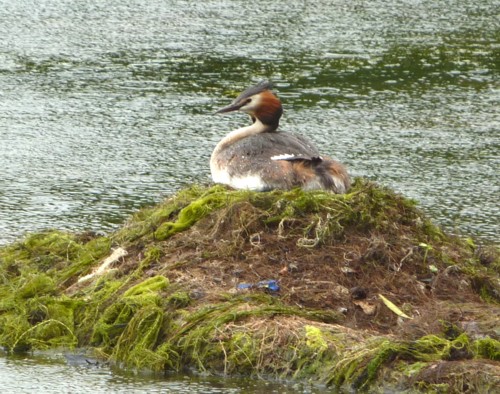 It was now raining heavily, and we sheltered under the eaves of the Ranger Station to have our lunch. One of the Rangers took pity on our bedraggled state and let us inside, so we finished lunch in style on their covered lakeside terrace! I left some MNA leaflets on their rack.

We dropped into their Quarry Garden on the way back to the bus. They have arranged a large collection of bog oak along one side and planted young ferns amongst them. The whole sunken garden will look interestingly prehistoric soon. 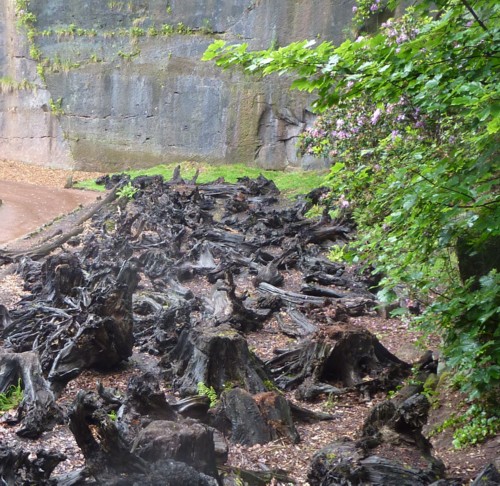