We met at Central on a bright and sunny morning, but the temperature was only just above freezing. Train to Southport (Pink-footed geese and a Curlew from the train) and then the 44 bus from Lord Street to Elswick Road, arriving 11.40, and then a short walk to the Marshside reserve. The local council are putting a smart new path down the side of Marshside Road and a pelican crossing on Marine Drive. Long needed, both of them.
Most of the pools in the reserve were frozen, but there was some open water along Marshside Road and in front of the Sandgrounders hide. It was a pretty bleak prospect, though, and we were amused to see ghostly bird tracks showing on the ice, probably made when it was slushy. 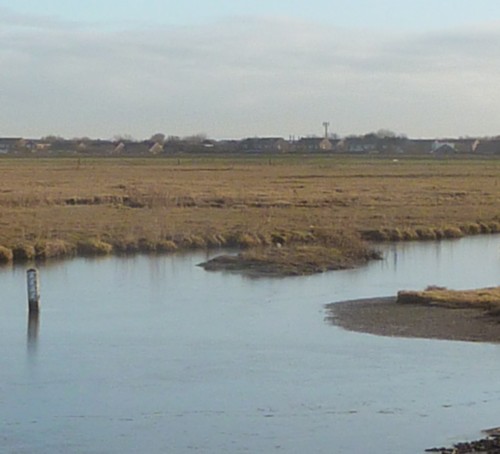 But there were corporeal birds, too: Wigeon, Teal, Black-headed Gulls, Lapwings, Moorhen, Coots, Greylag Geese, Starlings, one or two Shelduck, a female Shoveller, some Magpies and a dozen or so Black-tailed Godwits. Further out we saw a Little Egret and Mallards, and about 40 Pink-footed Geese flew over southwards. Someone called “Water Rail” from the north side of the hide, and there it was, swimming just under the windows, showing itself between patches of reeds. Best bird of the year for the Sunday Group!
On the other side of the road around the sand works we saw more Pinkies flying south, a Snipe, a Song Thrush and a Robin being stalked by a black-and-white cat. (Happily the Robin escaped!)
We walked back down Marshside Road for the bus and noticed the same small colony of House Sparrows we had watched in the spring. Why are they there and nowhere else? They are around a little old brick building, dated 1886, “The Fernley Observatory”, with a tall pole on its roof which used to carry a fog bell. Are the sparrows able to get in under the old roof and eaves to nest and roost, and is that why they are there?
We got the 2.28 train from Southport back to Liverpool.
Programme for the next few weeks is:
19th December, Eastham Woods and Christmas Meal, 10 am Central Station or 12 noon Eastham Ferry Hotel.
No walks after 19th December until 23rd January 2011. All walks in January and February 2011 will meet at 10am Central Station but the destination will be decided on the day, depending on the weather. (Note that the destination is subject to change at the discretion of the leader, but the meeting places will usually be the same.)
The Sunday Group is not part of the MNA, although it has several overlapping members. We go out by public transport to local parks, woods and nature reserves all over Merseyside, and occasionally further afield. We are mostly pensioners, so the day is free on our bus passes, and we enjoy fresh air, a laugh and a joke, a slow amble in pleasant surroundings and sometimes we even look at the wildlife! Anyone is welcome to join us. If you want to come out on a Sunday Group walk, pack lunch, a flask, waterproofs, binoculars if you have them, a waterproof pad to sit on if we have to have lunch on the grass, and wear stout shoes or walking boots. We are usually back in Liverpool City Centre by 4pm at the latest.