Posted on November 20, 2010 by Sabena Blackbird

A dozen MNA members met at a sunny Wigan Pier for the walk around Wigan Flashes led by John Clegg. We wandered along the Leeds -Liverpool Canal past the new apartments, stopping to watch Blackbirds, a rattling Mistle Thrush, Chaffinches and Greenfinch enjoying berries on the Rowan trees. 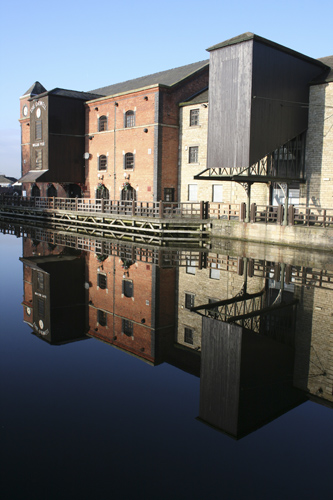 Further round British Waterways appeared to be carrying out repairs on the canal, the path was cordoned off and the water level low exposing mud. We crossed over a small bridge, continued through a new industrial estate and into the woodland. Candlesnuff Fungi Xylaria hypoxylon was growing on some of the moss covered logs and plenty of the trees had Lichens including Evernia prunastri and a few Pixie Cups Cladonia sp. 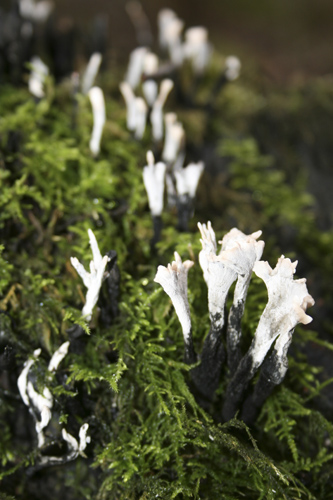 Birdlife was quiet with only a few Robins and Blue Tit.  The sun was in our eyes looking onto Scotsmans Flash but no matter it was uncharacteristically free of birdlife with only a few Coot and BHGs. Everything was crammed onto Pearsons Flash with a great count of 58 Mute Swans, gazillions of Coot, Tufties, Gadwall, five female Goldeneye, a lone Great Crested Grebe and five male Shoveler hiding out in the reeds. Descended down to the woodland at the south west end of Scotmans Flash. I had a route around finding some Purple Jellydisc Ascocoryne sarcoides and a collection of small orange discs on a fallen tree trunk – Eyelash Fungi Scutellinia scutellata, a.k.a. Molly Eye-winker 🙂 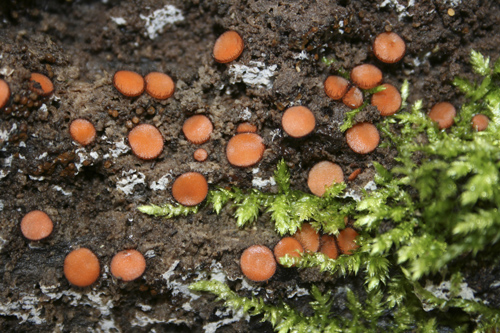 Ate lunch on the picnic tables at Ochre Flash, motley collection of BHGs, plus a few Mallards; Grey Heron and Cormorants flying around. Continued along the path Goldfinch and five Redwing overhead, Willow Tit was also reported. We stood by the reedbed where we had seen the Bittern last year. A ‘spring’ of Teal and a female Pochard but nothing else of note. Walked back along the canal and crossed over the bridge before having another nose over at Pearsons Flash. One of the Mutes had a green (Cheshire) Darvic ring but was too distant to read it. Plenty of lilac coloured Alder catkins out already! plus a few Pussy Willows. A flock of Long-tailed Tits was a nice end to the walk before we headed back into Wigan.